Virtual Meetings in Times of Pandemic

"May you live in interesting times." So goes the proverbial and purportedly Chinese curse, which seems appropriate given the global pandemic that originated around Wuhan, China. That said, it's also very likely false; the quote, that is, not the pandemic. The most reliable sources out there indicate that it's actually an English saying, as spoken in March of 1936 by British MP, Sir Austen Chamberlain. Chamberlain was remarking on Germany's breaking of the "Treaty of Locarno" and attributed the saying to a fellow parliamentarian who had been to China and therefore assumed it was Chinese. Regardless of whether Chamberlain's recollections were correct, we are now, most definitely, living in interesting times.

The current COVID-19 pandemic is serious on many levels, from the obvious dangers to health and well-being, to financial and social. It's probably an understatement to suggest that the Coronavirus outbreak of 2019 is affecting all aspects of our lives, and may take years to recover from. It may well turn out to be a defining moment in history for how we deal with such outbreaks as well as a turning point in how we deal with each other. Around the world, public gatherings have been limited, meetings and conferences have been cancelled, schools have been closed (my own kids are home for, at a minimum, three weeks), sporting events and entire seasons have been postponed or cancelled outright, and employees are being told to work at home whenever and wherever possible. Don't even ask about the toilet paper panic.

My friend and colleague, Evan Leibovitch, was slated to appear at FOSSASIA, an open technology conference that was supposed to start late March in Singapore. With worldwide travel restrictions in place, flights disrupted, and conferences like this being postponed or outright canceled, Evan was a bit bummed out, as we older kids like to say. As we were discussing this, I recounted stories of various events that have moved, not just online, but into virtual space.

As a techno-addict, I tend to enjoy living on the edge when it comes to consumer tech. Consequently, I've been playing with virtual reality (VR) for a few years now. I've had a fair bit of experience with VR conferences and meetings of late, and I've used several different platforms, including AltspaceVR, Mozilla Hubs, VRChat, RecRoom, and others. Shortly before this whole COVID-19 crisis reached DEFCON 3, I attended a few sessions of the "Educators in VR" event which took place in AltspaceVR, and later attended a few sessions of a health IT conference which had been canceled and moved into VR. Look at the image below. That's me in the red shirt attending one of the sessions. 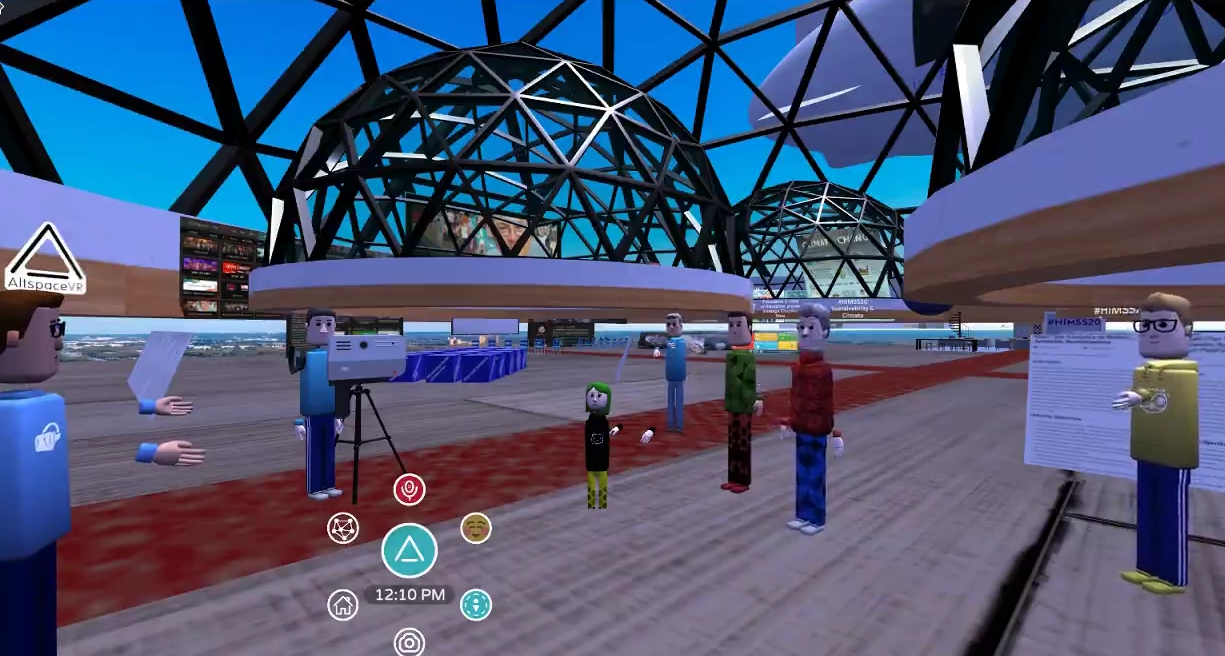 I even recorded an episode of my podcast with Evan Leibovitch in AltspaceVR. If you take a look at the image below, I'm on the left and Evan is the guy wearing that yellow shirt and blue track pants. 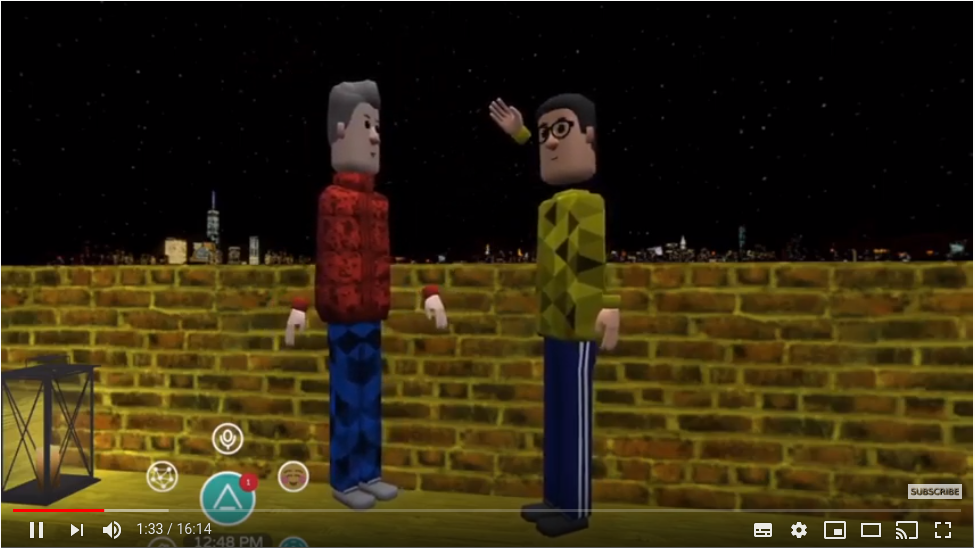 Human beings are social creatures. Joke all you want about the four hour meeting from Hell, but we naturally want to be together. Most of us would prefer to sit and talk to people directly, at least occasionally. We've had video conferencing for some time and we, here at LPI, often use Zoom to host online meetings. To us, it comes naturally because we are scattered across various parts of the globe.

Here's the thing about VR, though; it feels like you're actually there. Okay, it's not exactly like being there, but the immersive experience of VR will, after only a brief period of time, start to fool your mind into treating sights, sounds, objects, and people, as though they are actually there with and around you. It is, in many ways, like being there. Trust me. I've faced off against invading hordes of zombies and when you're toe-to-toe with them, your heart is pumping like they're in the room with you.

If you've stuck with me up to this point, you may be wondering where the Open Source angle is in all of this. During our experiments, Evan noted that our podcast environment required specialized VR gear in order to play. And even the Oculus Go that he’d bought at Christmas ($200) didn’t give him full freedom of movement, access to all of the VR platforms, or even two working arms. For that you need more-powerful gear like I have, the Oculus Quest which is almost triple the price of the Go. If you don’t have a dedicated VR gear, you’re out of luck with many of these platforms (and Google Cardboard doesn’t count). To top it all off, most environments is completely proprietary.

That's when I showed him Mozilla Hubs. 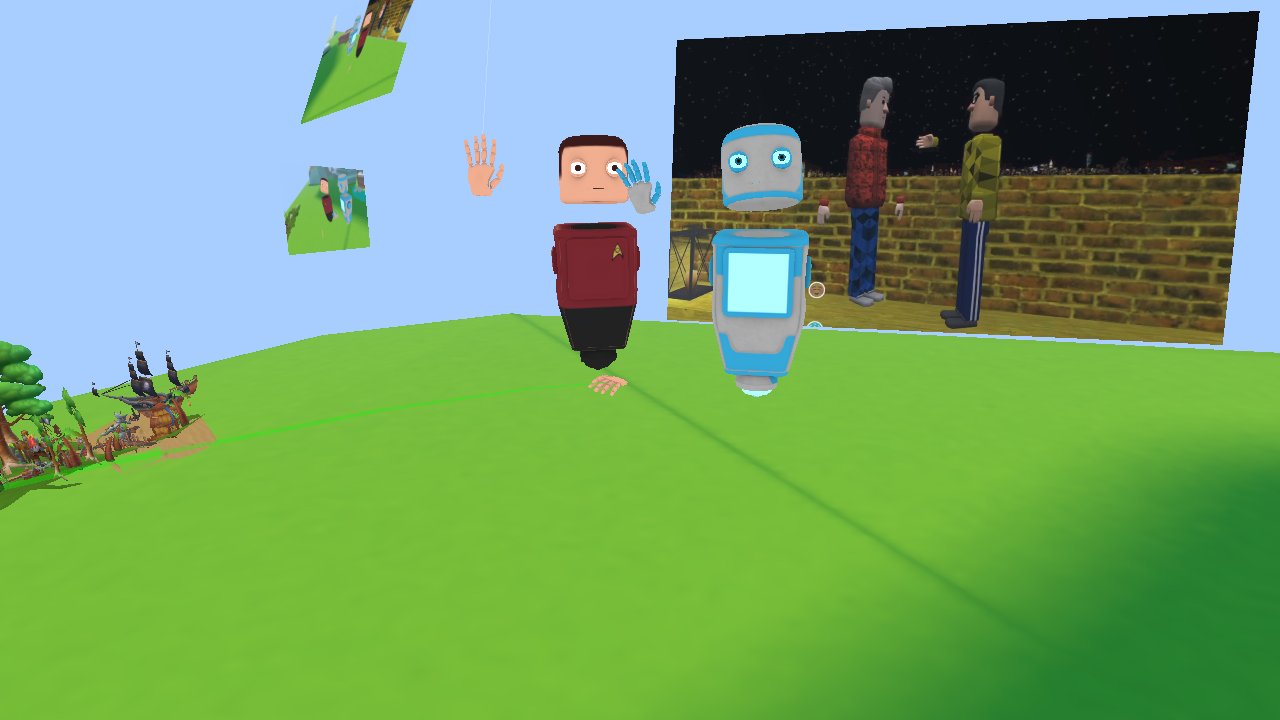 I'm the one in the red Star Trek uniform. Red shirts forever!

Mozilla Hubs is a completely open source social VR experience that allows you to build your own worlds, craft avatars, have meetings, watch videos together, and more. Here's where it gets really exciting. HUBS doesn't require a VR headset. You can access it from any desktop, using a Web browser. In fact, people joining a HUBS session can interact with people using phones, tablets, laptops, or virtual reality headsets. To those who use headsets, the browser sessions look as though they are also participating in the VR experience. When I first provided Evan with a link to a world I had set up in HUBS, I went in with my Oculus Quest while he came in with the browser on his phone, and I didn't even realize it. That's pretty cool. Even cooler. You can create a virtual meeting room for you and your friends, family, or colleagues, right now. From your browser! Just go to hubs.mozilla.com and click "Create a Room". It's incredibly easy.

Hubs also provides a number of tools for creating worlds to suit your individual needs, whether business or entertainment, and for creating custom avatars. The world creation tool, which also works directly in your browser, is called Spoke. The tool has a nice tutorial to get you started. From the Spoke world builder, you can import Google Poly models, Sketchfab, and other models, sound and light elements, video links, and more. If you're curious, click https://hubs.mozilla.com/tbr8k4W/ to check out a simple world I created using Spoke.

For avatars, there are multiple options. You can select from a variety of pre-built avatars, or generate your own using a variety of tools. I'm going to suggest that you try Quilt (http://tryquilt.io/), an easy way to quickly skin and generate an avatar for Hubs.

We're all going to have to learn to work remotely and in virtual environments, at least in the short term, and maybe going forward into the future. To that end, I am inviting members and anyone else reading this post, to embrace this open source technology and step into the virtual world of the future.

The big players are already working hard to pave the way. AltspaceVR, which I mentioned earlier, is a Microsoft product. Facebook is releasing Horizons, their social VR platform (currently in limited alpha release). VRChat and RecRoom, while more suited to entertainment than business applications, are also commercial products. There will be more.

The existing options all have their pros and cons, but as open source professionals, we should perhaps consider championing an open source alternative. That's where Mozilla Hubs comes into play. All you need is a browser, or if you've got one, a VR headset.

There's a real future in VR and it's just going to get bigger.